By Sam Smith
This member testimonial is part of our ongoing 2020-21 UUFP Canvass (click here to pledge). 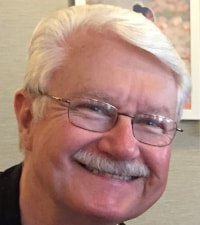 ​Thomas Merton, a Trappist Monk, philosopher and writer in the 1950s and 60s once wrote, “Many of us live lives of “self impersonation”.
​
I love the UUFP because this is a place where I am allowed to be and encouraged to be HUMAN, to BE my AUTHENTIC SELF!

This is a place that I can EXPLORE what it means to be human, to CELEBRATE that humanity and encourages us to learn and become who we REALLY ARE AND who we ASPIRE to be.

Each time I participate in any class, service or circle, I grow INTO my humanity and I’m enabled to celebrate the humanity of others.

In the 1970s and 80s, there was a sitcom called Mork and Mindy on ABC. It weekly showed the adventures of an alien from the plant ORK on a mission to Earth to study human behavior. I always identified with and admired Mork because he was always curious and had great empathy for others. He KNEW who he was and found OUR actions curious and even appalling at times.
​
A favorite scene of mine was when he and Mindy were in a restaurant and saw someone smoking, Mork asked Mindy why people smoked cigarettes. Mindy tried, as best she could to explain, and Mork asked her if it was bad for the human body. She said that it was and that the Surgeon General had even said that it could lead to death. Mork exclaimed that if that was true, smoking was like committing suicide, a little at a time. She said, “Well, I guess so”. He spotted a man at the next table lighting a cigarette and leapt into action, “talking him down” from not dying by his own hand.

The UUFP shows us how to be passionate about causes we believe in and try to “talk people down” from actions that are against humanity.
Mork was constantly “acting out” in public in an effort to help others be their best, for themselves and for those around them.

Parker Palmer said in his book, ON THE BRINK OF EVERYTHING, “We all live at the intersection of our small worlds and the big one around us”.

The UUFP assists me every day to live where I am, like Mork, and try to make it a bit better.

Now, the reason why I love this fellowship is the same reason why we are effective in “talking people down”, it is with CONNECTION! This past week has made me acutely aware of how much connection with other humans is important, especially those I love, here at UUFP, my neighbors, my relatives, my friends, and even strangers. I love speaking with and affirming others I come into contact with. It’s sort of a hobby. Everyone needs to be affirmed, recognizing their humanity and worth.

As we endure this time of, what I call “connection lite”, let’s be mindful, especially of those who rarely get affirmed, for WE are now the shut-ins, the isolated, the needy. As this necessary isolation goes on, it is becoming even MORE important to affirm others, in every way we can; texts, letters, phone calls and cards. Let’s invent NEW ways to connect and do it more often. What we are sharing is our HUMANITY with love.

Thank you for the privilege of participating with you in sharing with the world our precious Unitarian Universalist GOOD NEWS.