New Member Orientation..."the light of reason, warmth of community, the flame of hope"!

We are grateful for these additions to our UUFP family. Welcome!

I am married and have two children. My hobbies include writing, singing, music, and reading. I am retired.

I am a member of the Ramapough/Lenape Nation and a Chief of the Northeastern Native American Association, as well as an ordained member of the Church of the Spiritual Humanist clergy. My past experiences as an educator and counselor are in the areas of community health, domestic violence, and training/workshops dealing with sexuality, HIV/AIDS, EMT, CAN, and LGBTQIA issues; and I served as a board member of the Queens Women’s Center. I am also a published poet/writer and singer. 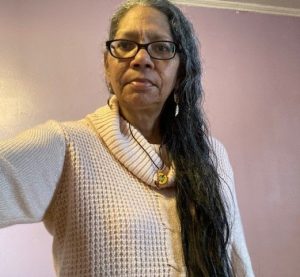 Prior to becoming a Unitarian Universalist, I was raised Catholic. In New York I attended the Unitarian Universalist Congregation at Shelter Rock Road in Manhasset, Long Island. During my time at UUCSR, I served in various positions including vice president of the Women’s Group, chair of the Caring Committee, and program counsel for adult programs. I continue to serve as worship associate via Zoom. Committees I served are LGBTQ+, Worship, Social Justice, and Choir. I was facilitator for Transgender Inclusion training and OWL for Adults. Also, I presented yearly workshops on Native American issues, domestic violence, sex and sexuality over 50, and community health issues. My interests are in mental health and Planned Parenthood.

I recently moved to the Hampton area and began searching for a Unitarian Universalist community, which led me to UUFP. I’m looking for a community and a place that I can call home in my spiritual journey. 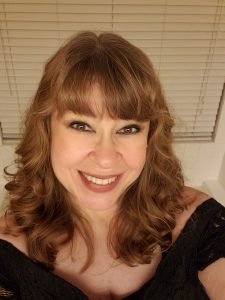 I have two grown children. My 33-year-old son, Tom, lives in Los Angeles, and my 31-year-old daughter, Autumn, lives in Michigan. I have no grandchildren yet. I was born and raised in southern California and relocated to Newport News in September 2020 to be close to my best friend who was fighting cancer. Fast forward to September 2022 when my best friend succumbed to the disease, and I became the legal guardian of her 13-year-old son, Thomas. So now I have two sons named Tom!

I love music, and before relocating, I sang with the San Diego Women’s Chorus. Forests are my sacred place. I am a Pagan with a college background in religious studies. I am a Reiki Master and an ordained minister.

I have two cats although I’m really a dog person (shh, don’t tell my cats!). I collect crystals and rocks, skeleton keys, and oddly — dirt from around the world.

I work as the Executive Assistant to the Executive Director of Newport News Williamsburg International Airport. It is by far the best job and the best boss I have ever had. I am deeply grateful.

I was born in Rhode Island and raised as a Catholic. Ultimately, I realized “This is crazy!” to say nothing of hypocrisy. For years I just did nothing. Recently I realized I wanted to connect with people who are sane and thinking.
After finishing college in Rhode Island, I started a career in teaching — in Rhode Island, then Norfolk, and then in Hampton. I finally received a Master’s degree and went into the field of mental health and addiction. I still work in mental health and addiction finding it much more fun than teaching.

I enjoy traveling, eating out, cooking at home, reading and discussing. I am direct, pretty blunt, and believe in saying what you mean and meaning what you say. I believe in “Live and let live.” 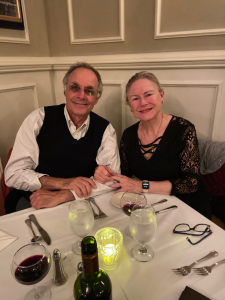 I was born in Altoona, PA, and moved to Orlando, FL, when I was eight years old. I was then a Roman Catholic, and I went to Catholic school for eight years in PA and FL. I switched to public school in ninth grade, the same year I started to study French. I did a career report in ninth grade on dental hygiene. I learned in my research that Swiss dentists hired American and Canadian dental hygienists because they had no schools for DH. I was an exchange student when I was 16 for two months in the summer in the south of France with Youth for Understanding. That experience really was a pivotal moment in my life. My French family, who I still am in touch with 51 years later, took me to many places on the weekends. One place was Geneva, Switzerland. I made a promise to myself while standing next to the "Flower Clock" in Geneva that I was coming back to live in Switzerland someday.

I majored in French and German at FTU (now UCF). During college I was an English/French tour guide at Disney World. In my second year, my counselor told me I was going to be a teacher. I said "no, I am not." So, I applied to dental hygiene school and became a dental hygienist with Switzerland still in my mind. In 1983, I applied and got a job offer in Tramelan, Switzerland, a tiny village in the Jura mountains of Switzerland. I bought a car and traveled with other hygienists and alone for five years. Four of us went to Kenya on safari Christmas 1985. It was the most amazing trip of my life.

I moved to Bern, Switzerland in 1985 to a new job. I loved that job, I spoke French, German and English all day long. Languages are my favorite thing. I met my husband at a party in 1987. I had been studying Italian to move to Lugano, Switzerland in the Italian part of Switzerland. I fell in love with my tall, dark and handsome Argentinian physicist who I met at a Christmas party in 1987. We moved over closer to Zurich, and we had our son, Luis, in Aarau, Switzerland in 1990.

In 1991, my husband accepted a job at Jefferson Lab, and we moved to Newport News. He also teaches at Hampton University. In 1993, we had a daughter in Newport News. In 1994, we moved to York County and live in the same house where we have been for 28 years. My son, Luis is a resident at University of Pennsylvania and will be an interventional radiologist in 2024. He is married and has a daughter, Myriam, named after my mom, Miriam. She is 7 months old and, of course, the most beautiful child in the world. My daughter, Celeste lives in Denver Co. She is a NNICU nurse and just got engaged to her fiancé. My son has a Bernedoodle, of course, because he was born in Switzerland. My daughter and her fiancé have a sheepadoodle. Jose and I have a papillion.

I am retired now but sometimes I fill in as receptionist at the office in Poquoson where I practiced dental hygiene for 21 years mostly one day per week. I love to cook, and I love to have people over for a meal. We have had people mostly physicists from so many different countries to dinner at our house over the years. I walk 5000 steps per day, love to travel and meet new people. I love to read, and I write poetry sometimes. I never met a stranger. People energize me. I love to help people. That is what I want to be remembered for.

I am a born and raised Air Force brat; graduated from high school in Yorktown in 2010. It was around that time I converted from Episcopalian to Paganism. It was also around 2010 – 2011 that I first set foot into the UUFP with a friend of mine to sate some curiosity about it. I am a U.S. Navy Veteran who served from 2012 – 2016. I graduated with my Bachelor's in Fine Arts from Christopher Newport University in 2020. I have my husband of ten years and my son who's three. I'm currently in school for a certification in Medical Billing and Coding while being a stay-at-home mom.

I love to write, paint, and do all sorts of crafts. I love knitting, learning crochet, cross stitch and candle making, and I would love to work with Resin. I am a gamer, and an absolute nerd, and love to incorporate my nerdy interests into my arts and crafts. Spiritually I feel more connected to the Celtic and Norse Pantheons and am learning more about them. I'm currently in the Order of Bards, Ovates, and Druids in the Bardic class so I can feel closer to my Celtic Ancestors.