Unitarian Universalist Fellowship of the Peninsula > eFlame blog > About Us/Organization > The 8th Principle—Vote “YES!” on June 5

May 23, 2022 by Lucy van Tine About Us/Organization, Justice 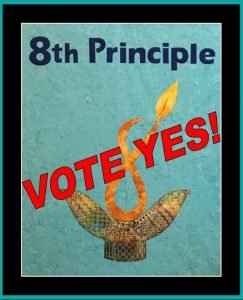 Prefer to view live? View
"Lucy van Tine’s Oral Testimonial in Favor of Adoption of the 8th Principle"
and "Introduction to the Proposed 8th Principle" for additional  information.

Those of us at the Town Hall last week heard some good arguments for why we should adopt the proposed 8th Principle. I too spoke at the Town Hall, and I’m going to add my voice here in the UUFP eFlame Blog, as well, for those who were unable to attend that day.

But first, for people who might still be wondering what the 8th Principle is, let me state it here. The 8th Principle, if our church were to adopt it, would be:

“We, the members of the Unitarian Universalist Fellowship of the Peninsula, covenant to affirm and promote:

By working to build a diverse, multicultural Beloved Community

By our actions that accountably dismantle racism and other oppressions within ourselves and our institutions.”

Adopting the 8th Principle would mean that our church could call itself an Anti-Racism Congregation similar to the way we call ourselves a Welcoming Congregation for our LGBTQ community and to the way we aspire to be a Green Sanctuary.

This isn’t the first time in American history that our denomination’s congregations have been caught up in controversy about the right of Black Americans to be treated fairly and equally under the law.

Leaving the Universalists aside for the moment, let’s look at the Unitarians as our example. In the first half of the 19th century, as the abolitionist movement was gaining momentum, Unitarians began joining that movement and adding their voices to the cause of ending enslavement.

Thoreau and Emerson were well-known Unitarians whose bold essays defending the character and integrity of John Brown changed public opinion about his actions and the actions of the brave group of men, both Black and white, who were with him at Harper’s Ferry, actions which made plain the federal government’s role in perpetuating enslavement.

Countering Thoreau and Emerson, however, was the Unitarian Senator John C. Calhoun, perhaps the 19th century’s most notorious racist, who directly and richly profited from the stolen lives and stolen labor of Black Americans and who used his considerable ill-gotten power and influence to fight for the continuation of enslavement.

But what did the average Unitarian, folks like you and me from that era, what did they do? Lots of Unitarians began joining Abolitionist Societies. They attended meetings, heard speeches, wrote letters to the editor, lobbied and rallied for abolition. Some also took it to another level; they took physical risks, bravely defying the federal government’s Fugitive Slave Act, to help people who had managed to escape enslavement.

Sadly though, the record shows not all Unitarians were on board with the abolitionist movement. Some just didn’t want to stir up controversy. It might be bad for business, they said, to take a stand. Better to sit this one out. To lie low. It will all get sorted out in the end, they said. Why stick our necks out?

Adoption of the proposed 8th Principle will be coming up for a vote at UUFP on Sunday June 5, right after Sunday services. We’ll have two hurdles to jump. We will need 40% of us to show up for the vote in person, by zoom or by absentee ballot, AND we will need two-thirds of that group to say yes to adoption.