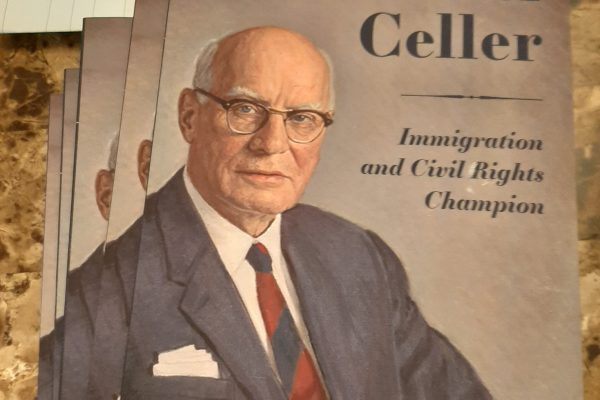 
Emanuel Celler is arguably the most significant American legislator of the 1945 – 1975 American century. Why? After a freeze since Reconstruction, the Brooklyn congressman put civil rights back on the table with his 1957 and 1960 bills that set up the landmark 1964 Civil Rights Act.

The next year, Celler witnessed President Lyndon B Johnson sign at the base of the Statue of Liberty his signature achievement, the Immigration Reform Act, ending 40 years of discriminatory “national origins” policy.

As a freshman congressman in the 1920s, Celler valiantly fought National Origins and lost, yet the congressional bulldog persisted until he was victorious.

Celler, the godfather of civil rights legislation, because of his power as chairman of the House Judiciary Committee for 22 years, is co-author of three Constitutional Amendments, including the much-discussed 25th Amendment that established presidential succession, and if necessary, removal.

Social justice, foreign and domestic, was Emanuel Celler’s life’s, which makes him a kindred soul of Unitarian Universalists.

Celler has been a frequent supporting character in the American drama, but now as subject of the first full-length biography of his life by yours truly, Celler takes a bow as lead actor.

Join us at Forum on March 21, as author and UUFP member Wayne Dawkins leads us in this vital ongoing dialogue, education and channels to positive change!

Piqued your interest?  Visit Adult RE and Sunday Morning Forum for more info!