Unitarian Fellowship of the Peninsula > Sunday Forums > Gateway to Freedom 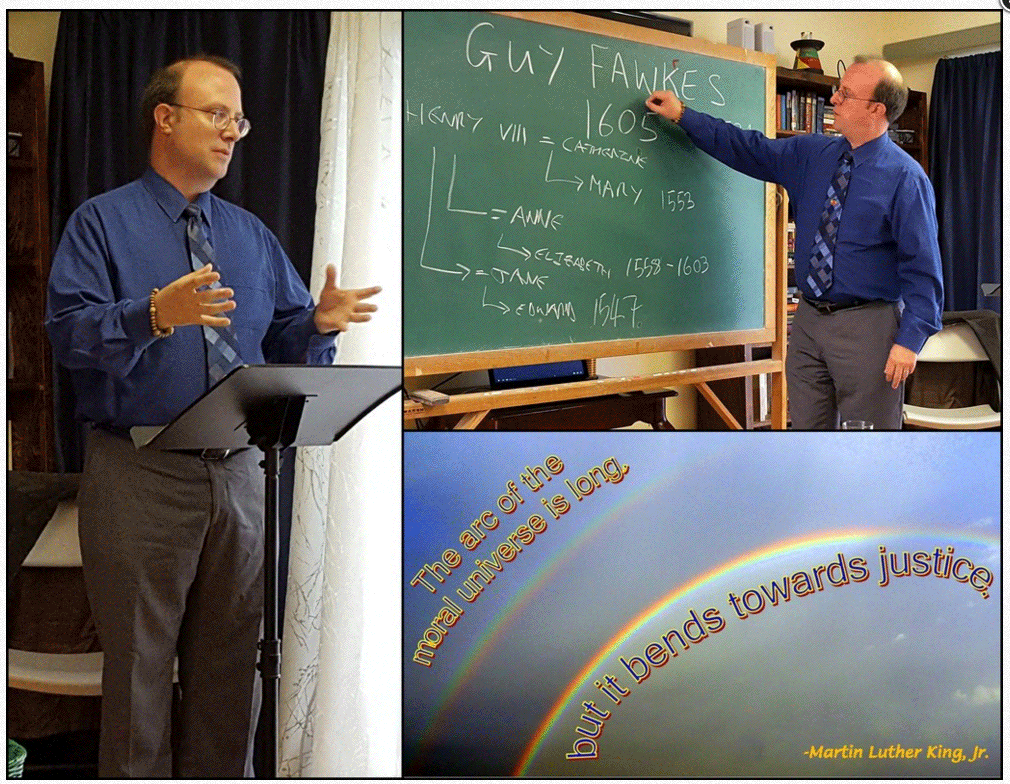 The Reverend Andrew Millard's presentation entitled "The Tragedy of Guy Fawkes and Gratitude for Religious Freedom" was much more than a history lesson! Click to enlarge

Sunday Morning Forum is pleased to have welcomed the Reverend Andrew Millard to its podium upon return from his sabbatical this past week! Pastor Andrew's November 5th presentation carried special emphasis because in England the date marks the "Guy Fawkes Night" celebration, when bonfires and fireworks help commemorate the foiled attempt in 1605 to blow up Parliament and the king.

The annual ceremonial burnings of effigies have often been viewed as acts of thanksgiving, but a more thorough historical appraisal offers insight into the inter-religious conflict and political oppression of that time.

History often repeats—a trite but true statement! However, an obvious deduction is to learn from our past so that we may improve the future. Using England's historical illustration as a backdrop, the facilitator invited the class to discuss the importance of religious freedom in our own age.
How does each of us understand religious freedom?

Does religious freedom make demands on each individual, and society at large, which pertain to civil rights?

If one secures a license to operate a business serving the public, would one be expected to serve all of the public? Should the government have the power to compel private businesses to serve all people?

If license to discriminate based on religious grounds is granted, what precedent might this establish?

What would prevent businesses from refusing to serve persons on other bases of discrimination (e.g., race, gender, even general dislike of persons)?

What about separation of church and state? Can we really exclude the moral fabric of our beings from the establishment of our laws?

Despite the United States Constitution being the foundation for political discernments, what could be the ramifications of a Supreme Court composed of Justices primarily of a single faith?

These and more questions were explored, but all led to a similar conclusion. Unlike some other countries, the United States affords rule by the people versus rule by a monarchy. In affirming Unitarian Universalist's Fifth Principle—the right of conscience and the use of the democratic process within our congregations and in society at large—we claim a voice and a means to effect change! How appropriate a discussion during this election week!

Dr. Martin Luther King, Jr., paraphrasing Theodore Parker, said: "The moral arc of the universe is long, but it bends towards justice." Teacher and students agreed: Cast your ballot; be an active voice! May coming to the table in a spirit of understanding and peaceful compromise be the gateway to true Freedom!