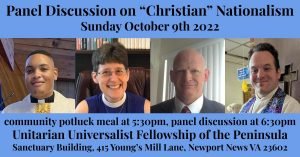 So-called "Christian" Nationalism is of growing concern to many religious communities, including Unitarian Universalist congregations and mainline Christian communities, given the harm it is doing to both American democracy and the Beloved Community. On Sunday, October 9, we are hosting a community potluck meal and panel discussion to talk about what "Christian" Nationalism is, how it is harming our society, and what we can do about it.

The potluck starts at 5:30 p.m., followed by the panel discussion at 6:30 p.m. This event takes place in the Sanctuary building. It is open to the public and features guest panelists from "Pastoring the City" (an interfaith group of Newport News clergy) representing diverse Christian traditions:

The Rev. Phillip H. Shearin is Priest-in-Charge for the Peninsula Ministry Partnership, a collaboration of St. Augustine’s and St. George’s Episcopal Churches. He studied at Hampton University and Trinity College at the University of Toronto and is in the Masters of Bioethics program at the University of Pennsylvania. Phillip is an alumnus of the Episcopal Service Corps and was Assistant Director of the Lawrence House Service Corps based in South Hadley, MA.

Ordained in 2001, the Rev. Anne Kirchmier came to Newport News in 2012, serving at St. George’s Episcopal Church before becoming rector of St. Andrew’s Episcopal Church in 2017. She has a passion for outreach, pastoral care, Christian formation and collaborative ministry, and is especially interested in justice issues. Since 2021, Anne has organized Pastoring the City, an interfaith, racially diverse group of Newport News clergy. She is married to Dr. John Herbst.

The Rev. Dr. John W. Herbst is Scholar-in-Residence for the Peninsula Baptist Association, for which he writes a blog about Bible and theology. He has a PhD in Bible from Union Presbyterian Seminary and spent ten years teaching courses in Bible and religion for several colleges and seminaries. An ordained Baptist minister, John preaches and teaches regularly at churches in Hampton Roads. He is married to the Rev. Anne Kirchmier.

The Rev. Michael D Burnett is a native of Poquoson where he resides with his wife, Christina; son, Henry; and daughter, Lydia. He is a minister in the Christian Church (Disciples of Christ), serving as Interim Pastor for Grafton Christian Church in York County and as Campus Minister for Flourish (formerly United Campus Ministries) CNU. Michael's theology is grounded in Love, Liberation, and Justice, and his ministry is firmly rooted in service to and solidarity with whomever the world considers “the least of these”.