May 29, 2022 by Michele Hirsch About Us/Organization, Justice 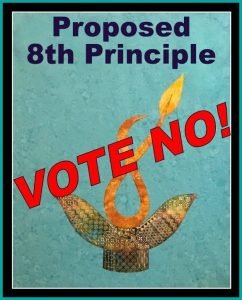 This is the "Proposed 8th Principle" that will be up for vote on Sunday, June 5:

"We covenant to affirm and promote: journeying toward spiritual wholeness by working to build a diverse multicultural Beloved Community by our actions that accountably dismantle racism and other oppressions in ourselves and our institutions." [1]

As a Black woman, who has dedicated over 50 years of my life to the values of justice and inclusion, I wanted to support it. I studied it and listened to others who are voting for it. However, I must stand against it. As currently written, I find this 8th Principle is just not right for Unitarian Universalism, the UUFP, or me.

My assessment is based upon the belief that our principles are supposed to describe strong values that serve as moral guides for participants in UU religious communities. While it’s obvious that the intentions of the people who drafted and are proposing the 8th Principle are good, good intentions only go so far, however. For a principle to work, it must express what is in their hearts as words. It saddens me to say that as currently written the 8th Principle does not do that!

Unlike the other principles, which are both elegant and eloquent, the 8th seems wordy and awkward. It uses unnecessary verbiage and most regrettably states things that many UUs may not believe. Let’s take a look at where the principle falls short:

"White UUs hold themselves accountable to communities of color, to make sure whites do what they say they will do. In practice, that can mean having a People of Color Caucus within congregations, districts, etc., to discern and express needs and concerns to the rest of the community. Black UUs hold each other accountable and help each other see and dismantle signs of internalized racism. We need an effective mechanism or structure to ensure this. Similarly for other oppressions."[3]

Whoa!  I imagine there are Black, White and UUs of “other oppressions” who might chafe at having accountability handed over to a caucus chosen based solely on the members’ skin color. While my fellow Black UUs may inform my opinions, I still affirm that I am accountable only to God and my conscience for my religious, moral, and social decisions.

It has been said that we’ve been wordsmithing this principle for years. However, that doesn’t ring true to me. The drafters of this principle emphasized that revisions are not welcome! People who bring up concerns or suggestions for improvement are often confronted with one of four arguments.

Again, there is only one reason to vote for this principle and that is because it describes our strong values and serves as a moral guide for those choosing to take part in UU religious communities. For the reasons I have given, this 8th Principle does not do that.  Consequently, I will vote against it on June 5.

[1] The 8th Principle of Unitarian Universalism

[2] The 8th Principle of Unitarian Universalism—What Is Beloved Community?

[3] The 8th Principle of Unitarian Universalism—What Does It Mean To Be Accountable?