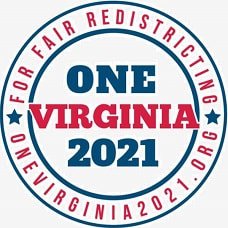 “GERRYMANDERING is the deliberate manipulation of legislative district boundaries to advantage or benefit a particular party or group, or to cause disadvantage or harm to an opposing party or group. It distorts the electoral process, undermines democracy, and renders legislative elections a meaningless exercise.” -OneVirginia2021​

ONE PERSON, ONE VOTE
In theory, each person would have one equal vote. But depending on how those votes are grouped in the redistricting process that occurs every 10 years after the census, one vote per person may not be so straightforward. To make matters worse, the establishment of the political boundaries that occur in redistricting has, over the years, resulted in an unscrupulous process known as "gerrymandering"—with Virginia being ranked as one of the most gerrymandered states in the country!

To shed light on this matter, the UUFP* Adult Form welcomed guest speakers on March 11, 2018, to educate listeners on gerrymandering and the current efforts underway to promote fair, non-partisan redistricting. Brian Cannon, executive director of OneVirginia2021, was unable to facilitate the discussion as originally planned; however, he provided presenters of note: his mentor, Rebecca Green, professor of law at the William and Mary Law School, and Janice Bayer, an avid volunteer at OneVirginia2021. 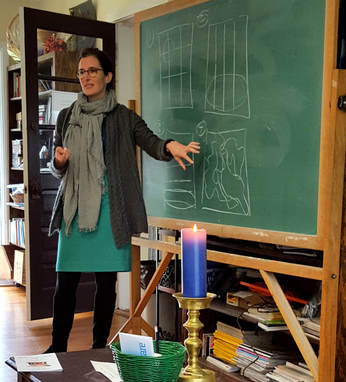 Professor Green began the presentation with a powerful illustration, demonstrating the challenges of fair redistricting. While drawing straight lines on a map seemed to be the most "fair" approach, Professor Green showed that cities and communities could easily be divided in a way where citizens would not receive adequate representation (such as when redistricting lines are drawn through the center of a major city). Also, the United States Constitution has two criteria for districting that must be met: equal population, and racial and ethnic fairness. Today’s sophisticated demographic data makes it possible to restrict ethnic diversity and group like-minded voters in districts, thus ensuring the balance of power remains with the party in charge at the time the lines are drawn.

Beyond the U.S. Constitutional districting requirements, the Virginia Constitution demands that congressional and state legislative districts be contiguous (touching) and compact. To circumvent these requirements, two principal gerrymandering tactics are used: "cracking" and "packing." "Cracking" dilutes the voting power of the opposing party's supporters across many districts. "Packing" concentrates the opposing party's voting power in one district to reduce their voting power in other districts.

Although a legislature drawing its own district lines presents a conflict of interest, there has been no agreement on a standard redistricting process. Different states have different laws for redistricting, allowing gerrymandering to flourish. Applying legislation such as the Voting Rights Act and the First Amendment, court cases challenging gerrymandering have been percolating all over the country.

One attempt to create a standard measurement of partisan gerrymandering is the “Efficiency Gap,” which measures each party's "wasted" votes—votes that don't contribute to a candidate's win beyond the 51 percent majority needed for victory. In an ideal, two-party world, the votes within a district should split roughly 50/50. In gerrymandering, however, one party seeks to minimize its wasted votes while maximizing the wasted votes of the opposing party. By measuring how many "wasted" votes are cast in an election, the Efficiency Gap test can help determine if gerrymandering has occurred.

However, the Supreme Court has been wary of setting a standard of fairness beyond race and ethnicity, which would require lines be redrawn. Professor Green pointed out how Supreme Court Justice Anthony Kennedy has left an “open door” regarding the establishment of a redistricting standard based on a First Amendment challenge from Maryland. Precedent from the Constitution's Framers is elusive, as there were no political parties at the time. Baker v. Carr, 369 U.S 186 (1962) was the case setting up federal court review of redistricting cases.

Janice Bayer then spoke on specific efforts by OneVirginia2021 to prepare for the redistricting that will occur after the 2020 census. OneVirginia2021's goal is to amend the State Constitution to have an independent commission conduct the state's redistricting. As Bayer showed, amending the Constitution is difficult; however, redistricting has become a bipartisan issue, as the party who wrote the last plan will want “fairness” if they find themselves in the minority after any future census. Also, the makeup of the State legislature determines many matters in people’s lives and should represent the views of all citizens. ​

*Unitarian Universalist Fellowship of the Peninsula 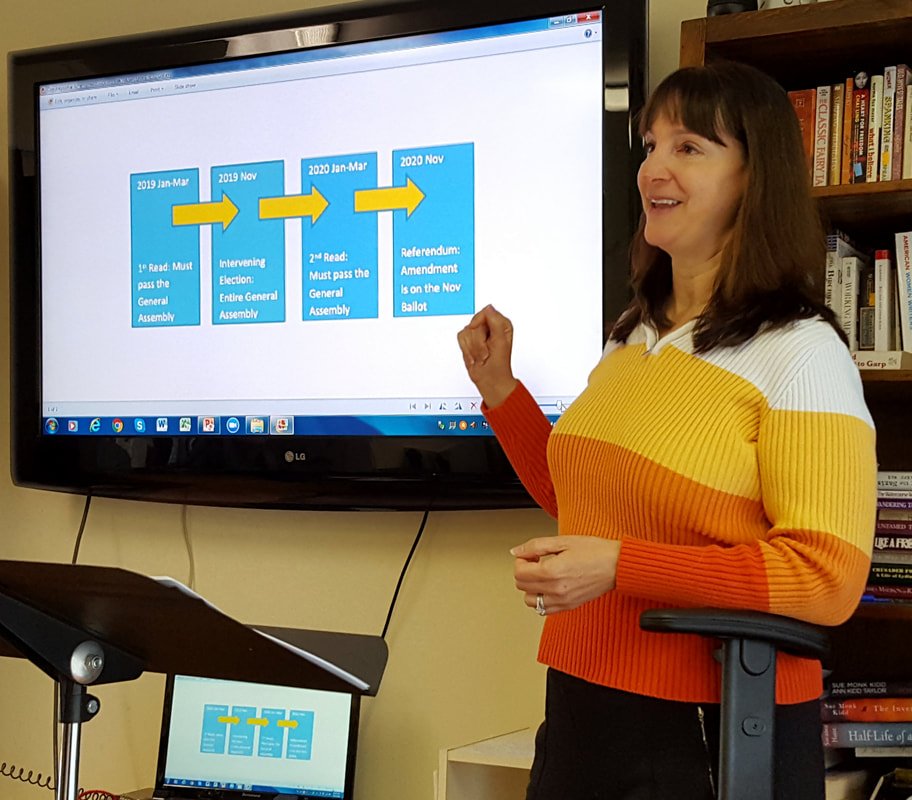 OneVirginia2021 is currently seeking voters to sign petitions and contact legislators in its 10-month push to address gerrymandering in the next legislative session.  Want your one vote back in your hands?  You can sign the petition here:  Participate - Sign Petition.