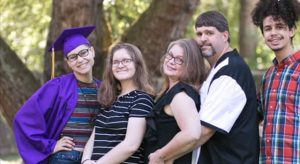 My name is Jeannine, and I’ve been a member of the UUFP since 2009. My three kids have grown up here at the Fellowship.

I’ve spoken publicly before about supporting the proposed 8th Principle, and at first, I thought I didn’t have anything else to say. I’d spoken; I was ready to vote “yes”…surely, that’s all?

But as we approach the vote, I find I have more thoughts crystallizing around this vote. Especially the importance of the vote to our future.

Question: So what do we at UUFP accomplish by voting “yes” at this point on the “proposed 8th Principle”?

We signal that UUFP is “accountably” anti-racist.

We signal to the UUA and other UU congregations that the Article II Study Commission should factor anti-racism into the revision of our UUA’s principles and purposes.

We signal to the public visiting our website that anti-racism is a priority at UUFP.

At first glance, “signals” might seem to make our coming vote less important. If we’re just signaling, maybe that isn’t important or a real world action.

And signaling to the public that we are committed to anti-racism is increasingly important if the UUFP is to thrive. Over the course of the pandemic, a lot of UUFP work and communication went to Facebook, for good or for ill. A lot of good came from that—continued connection through the pandemic, for example, and probably some outreach to folks virtually. But one negative to consider is that young people, people under 40, really aren’t on Facebook these days. And that means we’ve missed some of the conversation from younger people (let’s say, under 40) around anti-racism.

If you’re on Instagram or TikTok, or probably Twitter (I’m not as familiar with that format), the message from progressives under 40 is pretty clear—anti-racism is step one for their involvement. Progressive Millennials and Gen Zs don’t see it as optional. Don’t believe me? Type in Progressive in the search bar on Instagram or TikTok. Right now, the discussion is pretty skewed toward gun control, but anti-racism and the confrontation of racism in our society are still right up there.

Which means that if we invest time and money in hosting kids’ events and introduce young, progressive families to Unitarian Universalism, but we aren’t signaling as anti-racist, we’ve cut the reach of our future membership. Especially if, hypothetically, another UU congregation in driving distance was to vote to accept the proposed 8th Principle.

We’re also signaling who we are today, post-pandemic, to all of those members and friends of the fellowship who’ve been less active due to various “pandemic things”. I am certainly guilty of being less active. A lot of “things” have happened to me the last two years, often very traumatic, that I’m really not ready to unpack publicly. So I’ve basically disappeared from Sunday services, for example. And I don’t think I’m alone.

When I’ve reached out to UUFP member friends who’ve gone quiet around the 8th Principle vote, I hear variations on “I’m waiting to see what they decide.” In other words, a lot has happened in the last two years. People have changed. Institutions have changed. And we need to signal to the community who we are. Not least to our own community, the members who’ve stepped back into pandemic mode, watching from the sidelines.

So I truly hope we do that. The proposed 8th Principle, as I’ve said publicly before, basically describes who I already thought we were. Let’s go ahead and send that signal to the Virginia Peninsula.

So I truly hope we do that. The proposed 8th Principle, as I’ve said publicly before, basically describes who I already thought we were. Let’s go ahead and send that signal to the Virginia Peninsula. 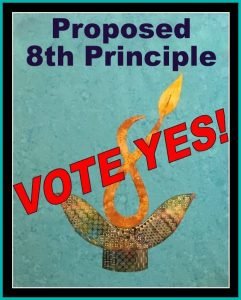