UUFP member Brad Harper is retired from the army after over 37 years of active duty, first as an infantry officer, then as a physician. He relates that he was fortunate enough to have four commands, and what follows here is about one of his soldier 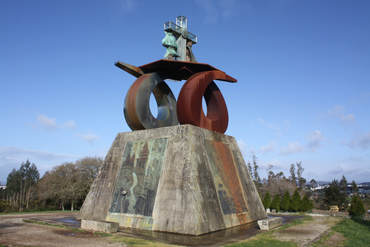 October, 2010. I am standing atop Monte de Gozo, or “The Mount of Joy,” and I halt where millions have paused before me. The city of Santiago de Compostela lies before me, and I shiver slightly as the sweat on my back is chilled by the cool Galician breeze. The skies are overcast but the rain has stopped, though its scent still fills the air. I see the cathedral roof, still some five miles away, peeking out from the surrounding buildings, and hear the sound of its bells ringing across the valley, guiding me as a lighthouse does ships at sea. I sense Michael’s excitement, but he says nothing. He doesn’t have to.

I met Michael in Vicenza , Italy, where I was in command and he was one of my medics. Born with Klinefelter’s Syndrome, (47 XXY), the additional X chromosome put his body at war with itself, as it fought to deposit fat around his bottom and breasts, forcing him to work far harder than most to meet the height and weight requirements for a male soldier. He was awkward in his ostrich-like body, and starved for acceptance. I learned that he had once been a freelance photographer for the Associated Press, so I made him our unit photographer and the recognition made him happy, giving him a role at social functions where he was otherwise at a loss.

I was called one night to an Italian hospital after he turned himself in for contemplating suicide, and he apologized tearfully. That's when I told him I knew of his condition, and that it didn’t lessen my opinion of him. “We are as God made us,” I said, and we embraced.

There were no more admissions after that, and as my time in Italy came to a close, he volunteered for Afghanistan. The assignment was to a training unit embedded in the Afghani army, and I feared how Michael would be accepted, but my efforts to block his transfer were overruled. We kept in touch. Michael made sergeant and received the Bronze Star. Apparently, the soldiers there understood that Michael was a damn good medic, and would do anything to save them. I think it was the first time in his life he was fully accepted for himself.

By the time Michael returned to Vicenza I was gone, and he was not welcomed back warmly, but seen as a “problem” soldier, struggling to meet the expectations of a new command. One dark night in the Italian mountains he jumped off a bridge, fell sixty-five feet, but survived. When I visited him at Walter Reed every extremity was suspended and pinned. I did my best to reassure him I was there to encourage, not berate, and we talked a long time. At one point, I mentioned my dream of walking the Camino once I retired from the Army. I felt the need to figure out who I was after a lifetime in uniform, and since the ninth century this ancient pathway to the bones of the Apostle James has been one means to find such answers.

Michael looked up at me and in a quiet voice asked, “When you go, may I go with you?” I hesitated. I had envisioned this journey as a private affair, a walk of contemplation of where I had been, and yet to go. Then I saw his eyes. I said, “Yes,” and meant it.

His rehab went well, he was discharged to the VA, found a girl and got engaged. Then one day I got an email from Michael’s fiancée, telling me Michael had taken his life. She wrote that he often spoke of our promised walk together, and she asked me to light a candle for Michael when I finally walked The Way.

The VA says that on average twenty-two veterans take their life every day. That's a grim statistic, but Michael was far more to me. He was “my” soldier, made in God’s image, as God had always intended him to be. 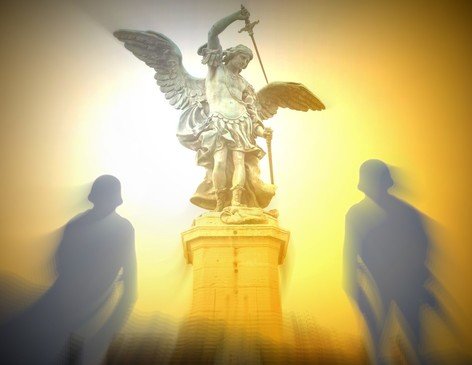 Three months before he took his life, Michael sent me a series of photographs he took of a statue of the Archangel Michael outside a cathedral somewhere in Italy. The angel looms high on its pedestal, a sword in its right hand, prepared for battle. The one I found most striking was taken in the dead of night with just the outline showing, and I imagine Michael keeping vigil somewhere, still ready to serve, and protect.

The bells are loud as we approach the entry, celebrating our journey completed, our promises kept. We enter the cathedral together, and as we do, I whisper, “We made it, Michael. Time to rest.”

When I am asked if I walked the Camino with anyone, I truthfully answer that I was by myself--but never alone.

To walk-with is such an invaluable human gift - for both involved. Thanks for sharing such a precious and compelling story, Brad. The sweet silver song of the lark lives on!