“For all that is our life” by Rev. Andrew

In services this morning, our “Blessing of the Backpacks” prepared our students of all ages for the year ahead, sending them into the days and weeks ahead with hope, with courage, and most of all with our love. For many children, a new year of school is about to begin, in some cases at a new school with new teachers and some new friends, too. For children who are home-schooled, there’s a new season of classes and new subjects at home. Many of our young adult students are already in their college classes, and, of course, education is life-long, with grown-ups of all ages taking courses whether that’s to further their own careers or simply for the love of learning. 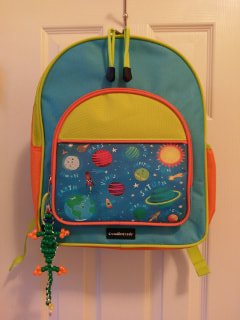 Offering our blessing on all of our students — recognizing their bags and backpacks not as mere tools for carrying books and papers and pens but as visible reminders that we are thinking of them, that we believe in them, that we have faith in their future — seems an appropriate way to mark the end of the Summer, given the impact of the start of the school year on our society. And it’s a marked improvement over how Unitarian Universalist congregations all across the country used to do it...
~ ~
Not long after I’d moved to Connecticut in early 2001, I learned that there was a Unitarian Universalist congregation just up the road from me. The first service I attended there was on Easter Sunday, and not long after that I went to an orientation and became a member. Then something very strange happened.

Services came to an end for the Summer.

It turned out that, for the months of July and August, this congregation and the UU church in the next town had an arrangement where they would share services. Anybody coming to one congregation, assuming there’d be a service, would be greeted by a hand-scribbled note taped to the door saying that services were being held at the other congregation. Oh, and since the two congregations held their services at different times, well, there was no way to actually make the other service anyway.

I asked someone about this curious arrangement and was told that it was because “everyone goes to Cape Cod for the Summer.” And “everyone” was said as if it literally meant everyone, except that the person saying it didn’t go to Cape Cod — not even for a week, let alone for two whole months — and I never met more than a handful of people who did much more than take trips to see family while their children were out of school for the Summer. Certainly anybody who had a job was expected to continue working at that job regardless of the time of year.

Since then I’ve learned more about this imaginary tradition. For many decades it was customary for Unitarian Universalist ministers to take all of their vacation and study-leave time during July and August. I think that’s a ridiculous custom. It makes not a single jot of sense for ministers to be entirely absent from their congregations precisely when we get many visitors, particularly families who are taking advantage of their children being out of school to do some “church shopping”.

So strike one: not everyone goes away to a vacation home during the Summer. And strike two: it’s a bad idea for ministers to be gone for the Summer, too. Here’s strike three.

Back before the advent of modern sanitation — including the single most important idea in the history of medicine that washing one’s hands after going to the toilet is a wise thing to do — outbreaks of diseases like cholera were common in big cities. And in old New England, it was simply a matter of survival that if you could get out of Boston during the Summer when the incidence of such diseases spiked, then you did. Now the Unitarians tended to be well to do, and families like the Channings and the Longfellows had the wherewithal to escape East to the Cape or West to the Berkshires. The Universalists, by contrast, tended to be spread out in the countryside and their ministers were also practiced circuit-riders.

(While I may be exaggerating a few points here for effect, the fact remains that the UU “tradition” of taking the Summer off has more to do with classist privilege than anything else.)

So how does that affect us today? Well, it doesn’t. Or, at least, it shouldn’t. Strike three is that we know about washing our hands and about not dumping raw sewage into our supply of drinking water.

When I first experienced the uniquely Unitarian Universalist ritual known as the Water Communion, for example, it was part of an end-of-Summer service at the UU church in the next town. My congregation never did Water Communion because they didn’t have services in August. What we did do was an “Ingathering” service, so named because there was apparently an idea that the church had somehow disintegrated over the Summer and needed to be put back together.

​Thankfully, many Unitarian Universalist congregations no longer have an “Ingathering” service — or if they do, it’s about the start of the school year, which in states that are not beholden to the needs of amusement parks might be in mid-August or even earlier. It’s not because the congregation ceased to be for a few weeks.

Our mission to grow in wonder, connect in love, engage in service and inspire generosity does not get put on hold just because it’s the Summer. Life continues to challenge us regardless of the time of year, and we need the comfort of being part of a community of the like-hearted just as much — and sometimes even more — during July and August. We continue to have questions that need good answers — as well as answers that lead us to better questions — and we continue to seek ways to grow the Beloved Community and bring into being a more just and equitable and compassionate world. This is what we do, seven days a week and all twelve months each year.

May we remember that, regardless of the Season, we continually strive for the best of creation, of humanity, of ourselves. For it is in us and through us that our tradition comes to life, liberating minds and souls from lifeless creeds and moving forward together in the spirit of love that gladdens the hearts of all people.
~ ~
The Unitarian Universalist Fellowship of the Peninsula will be celebrating the Water Communion on October 1st, with the Rev. ​Cynthia Snavely officiating.