“For all that is our life” by Rev. Andrew​

On the first Sunday of May, our Sanctuary was at capacity for the “White Supremacy Teach-In”. Like a majority of Unitarian Universalist congregations in late April or early May, we changed our regularly scheduled Sunday morning services to respond to a call to action from a growing network of UU religious professionals and and lay leaders, led by UUs of color and white UUs working together. As Black Lives of Unitarian Universalism put it,

“White supremacy” is a provocative phrase, as it conjures up images of hoods and mobs. Yet in 2017, actual “white supremacists” are not required in order to uphold white supremacy culture. Building a faith full of people who understand that key distinction is essential as we work toward a more just society in difficult political times.”

Following a homily by UU seminarian, Jaimie Dingus, the greater part of each service was devoted to small group sharing and deep listening. After all, like anything else good and important, the work to dismantle white supremacy requires us to show up with our hearts and ears open. We hoped that our collective vulnerability would be transformative and powerful, welcoming everyone to participate to the extent that they were able. Whether practicing empathy, sitting with discomfort, or feeling affirmed in any decision to pass or step out for self-care, the teach-in was intended to be one of many steps in work that will bring us into wholeness with the values of our faith. 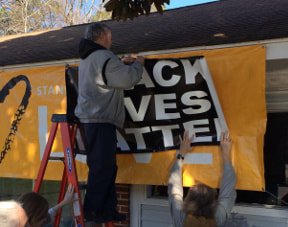 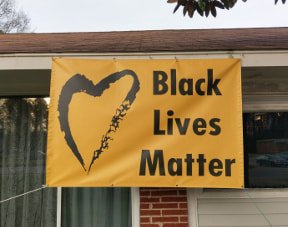 Our Black Lives Matter banner that includes the heart of the Side of Love campaign.

Over the last few years, especially since the protests following the August 9th 2014 fatal shooting of Michael Brown by a white police officer in Ferguson MO, I have preached on these topics a number of times. Sermons have also been offered by our DRE, Joanne Dingus, our former interns, Christina Hockman and Walter Clark, and others. In February, we hung a Black Lives Matter banner on our building, and UUFP members have participated in Black Lives Matter events around Hampton Roads. This is an urgent and important matter and we have both the need and the desire to continue the conversation.

There are a number of general resources to continue our individual learning, to foster group discussion, and to motivate commitments to act. First and foremost are the national Black Lives Matter organization and Black Lives of Unitarian Universalism. The Unitarian Universalist Association and UU World magazine have also published many writings and articles, including the 2015 Action of Immediate Witness, “Support the Black Lives Matter Movement”. These and other resources to which I would draw your attention include:

I would encourage you to spend some time with these and discuss them with others within and beyond the Fellowship. Some of them will challenge you — I know that there’s much that challenges me. They will stretch us and require us to engage in self-care, but most important is that we stay in the conversation, work on our way forward, and put our faith into action.

5 Comments
Scott8/9/2017 01:47:36 pm
We are a predominantly white congregation physically situated in the middle of a predominantly black community. Other UU congregations are usually situated in predominantly white communities. It seems to me what we have here is an opportunity to lead in ways other congregations cannot -- that is, were we to focus.
Reply
Sandy8/9/2017 07:38:01 pm
Thank you for reminding us of this important effort Andrew.
Reply
Lin8/9/2017 08:13:59 pm
Scott makes a very good point. I have been visiting all the churches in the DC suburbs and many are in very white communities where this is a big challenge. UUFP's location is a strength. How can it be leveraged?
Reply
Lehni8/10/2017 09:44:33 am
Thank you for the reminder and the list of resources, Andrew. You are right, we of the UUFP do have a unique opportunity.
Reply
Andrew Millard8/16/2017 05:00:27 pm
Thank you, all, for the comments. Scott, you are quite right. Lin, that's the question to ask!

And don't forget that the UUFP is chartering a bus to go to Washington DC on September 30th for the March for Racial Justice: http://www.uufp.org/announcements/get-on-the-bus-march-for-racial-justice
Reply