'“Diversity is generally divisive, and it has to be managed. There is some interesting research showing that when you celebrate diversity and point it out, you split people, but if you drown it in a sea of commonality, then it’s not a problem. So anything you can do to emphasize how similar we all are, how much we have in common, is good. Anything you can do that celebrates — “Look at how different we are. Look at how diverse we are' — that tends to make it harder to have any group cohesion and trust.” -Jonathan Haidt 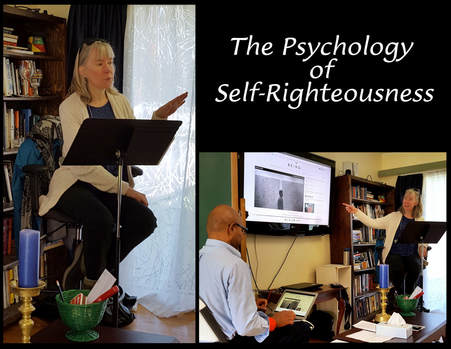 ​Lin Chambers had a “driving moment” as she was listening to NPR’s On Being radio show featuring social psychologist Jonathan Haidt - The Psychology of Self-Righteousness. Intrigued by Haidt’s interview, Lin subsequently purchased his book: The Righteous Mind: Why Good People are Divided by Politics and Religion.

​Haidt’s works were an inspiration and springboard for discussion at the March 4, 2018 Adult Forum. Facilitated by Lin, the class focus included how essentially good people can end up on opposite sides of the political and religious perspective, and how people at both ends of the continuum are at risk of blind self-righteousness.

Haidt defines “conservative” and” liberal”—"not necessarily as political affiliations, but as personality types or ways of moving through the world.” With the psychology of morality and the moral emotions as Haidt’s specialization, this New York University professor’s research indicates that people often believe they have discovered sole truths and are stating facts, while they are actually repeating what they have heard and read, and what they have seen and interpreted.

People’s ideas, beliefs and what they declare as facts often become a closed moral world in which they are unwilling and unable to think beyond their own perspectives. Haidt cites that it is impossible to see the flaws in one’s own “moral matrix”—a major impediment to conflict resolution and bridging political and religious gaps between conservatives and liberals.

Lin continued by explaining Haidt’s Moral Foundations Theory and its importance in civility, problem-solving and speaking across difference. Liberals are viewed as morality-focused, with emphasis on compassion, fairness and social justice. Conservatives value loyalty and authority, preferring order and structure. People on the left tend to be universalist. People on the right tend to be parochial. Rigid application of each group’s values limits their understanding of the other’s motivations in political and spiritual decision making.

This is where building relationship is crucial to finding the balance between the two extremes, says Haidt. In accomplishing goals, using conservative and liberal virtues in complement to each other render the most effective results. “When you get people to actually understand each other, and they let down their guard, and they learn something new, and they see humanity in someone that they disliked or hated or demonized before, that’s really thrilling. And that, I think, is one of the most important emotional tools we have to foster civility.”

Our thanks to Lin Chambers for leading us in a measure of self-examination and for generously donating Jonathan Haidt’s book to the UUFP. Interested in learning more about Haidt’s studies on moving from a state of polarization and paralysis to being a catalyst for political, religious and social change? Check out Haidt’s book available in the UUFP office.