Unitarian Fellowship of the Peninsula > e-Flame blog > Justice > And We Must Rise Up! 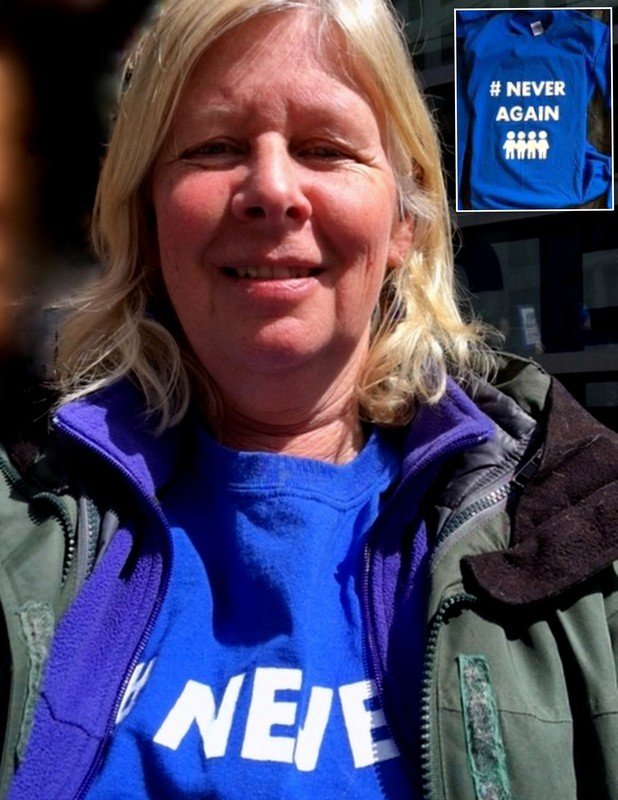 #NeverAgain--a message donned by many a marcher.

On Saturday March 24, 2018, I got on the bus that our Social Justice Committee had reserved and rode up to the March For Our Lives in DC. I was surrounded by my friends both church and non-church. It was early, and the sun was still rising, but you could feel the energy in the air and the anticipation for what the day would bring. 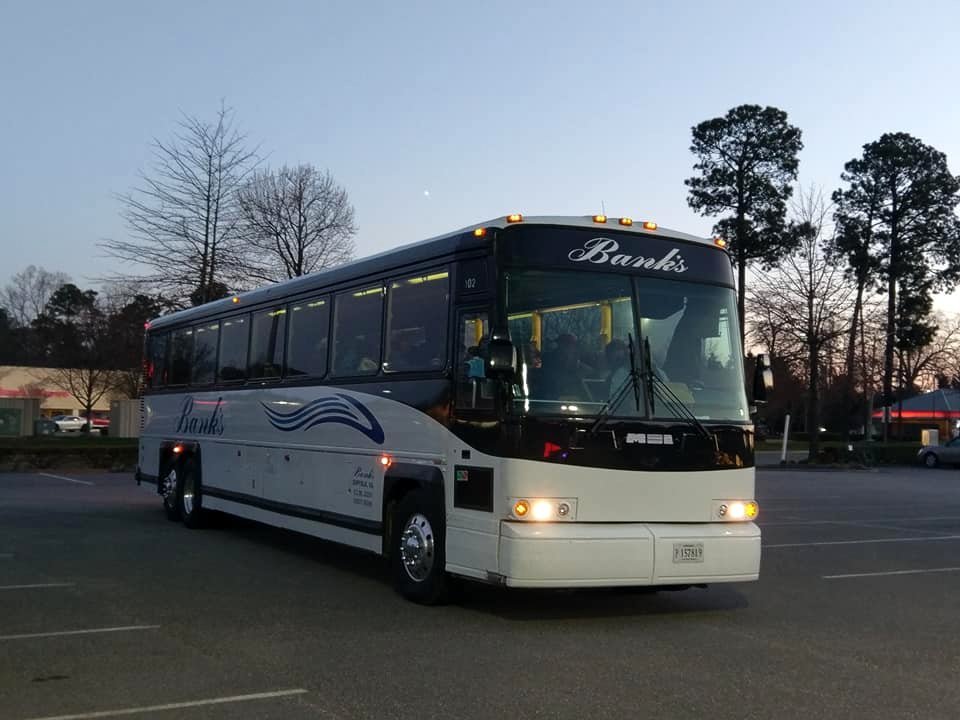 When I first heard about the march, I held off signing up, hoping there would be something nearby. But after reaching out to local organizers and finding nothing had been scheduled, I made the decision to go to DC. Of course, closer to the date, it turned out that marches were organized in Norfolk, Williamsburg and even Newport News. I’m pleased that many of our other members and friends were able to support those events. 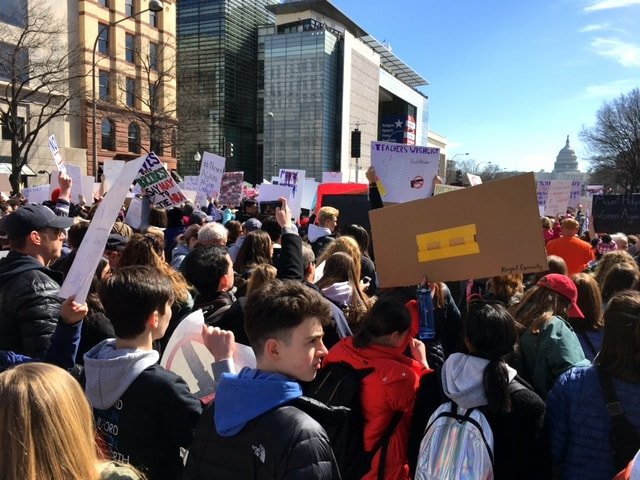 I had some anxiety about going to Washington. Although I was glad to have gone to the first Women’s March there, it was a really hard day physically and emotionally, and attending the Women’s March in Williamsburg this year was so much easier and less stressful. In addition to worries about overly crowded metros, being trapped in a crowd that never moved, finding a portalet when needed, staying hydrated, being able to see or hear anything, and getting back to the bus on time, there was the extra worry about whether there would be violence. After all, this was a march about gun rights. I fully expected to see counter-protesters bearing arms. But as it turned out, of the three marches I’ve mentioned, the only one where I saw someone openly carrying a gun was in Williamsburg.
When we arrived at the Robert F. Kennedy Memorial Stadium, my excitement revved up seeing all the buses already parked. I looked out the window and saw a group of young people heading toward a shuttle bus led by a woman my age. It was Chris Johns, the director of religious education, in Fredericksburg. Yup, I was in the right place. 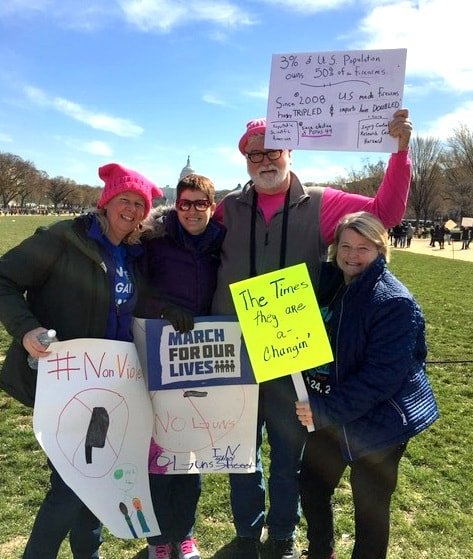 My group of four decided to take the metro. We each grabbed an extra water provided by the city and prepared for long waits and crowds. But much to our surprise, we were the only people in our car except for a man from Pennsylvania who said he had come with a group of Quakers. For a moment I wondered if maybe, people had decided not to support this march. Maybe the attendance would be far lower than expected. Our group continued up to Pennsylvania Avenue and made it to 6th Street; that’s when we knew there would be plenty of support for this march. We pretty much stayed there for the entirety. Overall, it was a very comfortable location. We could see the stage in the distance, and the nearby speakers and screens made it quite easy to see and hear the whole event.

One after another, students from Parkland and students from around the country shared their stories and their messages about the effects of gun violence on their lives and the desperate need for change. Several other top singers performed and there was a special appearance by Martin Luther King, Jr.’s, granddaughter who led us in a chant. There were several videos broadcast throughout, including the one where we heard the shots being fired at Parkland. Videos featuring views from various politicians and the National Rifle Association were met with roaring disapproval from the masses.

The whole event was extremely well organized and professionally executed. The student’s statements were powerful and confident. They showed their passion and their ability to lead. But there was one moment in the day, completely unplanned that may have sent the strongest message. One of the Parkland students began speaking about her experience. She went on to recite a poem she’d written, and halfway through, she suddenly threw up. You could hear other students yelling, “We love you,” as she continued to heave. A woman, perhaps one of her teachers, held her shoulder. 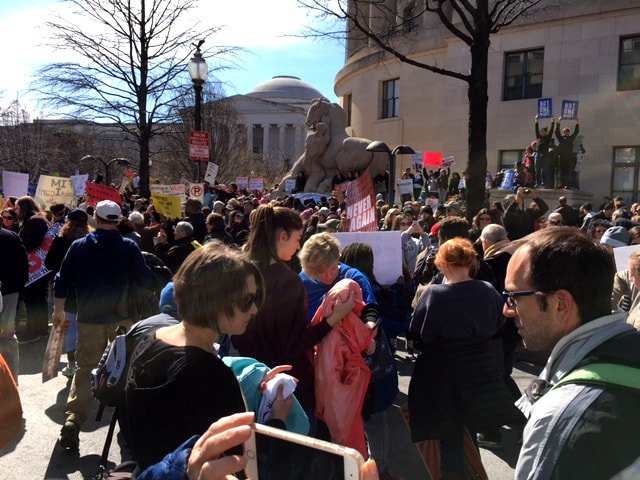 And then the girl rallied. She laughed and said, “Oh my God, I just threw up on national television.” And we all laughed, and smiled, and she continued. She finished her poem, and she finished her speech. She persisted. And it was the most human moment. The greatest moment of universal connection to the human condition.
​Of course, she would throw up. She was a 15, maybe 16-year-old student in front of 800,000 people. She was on the same stage as Pop culture, super stars. She was public speaking! Who among us has not felt the shaky knees, the queasy stomach, the light-headedness that goes along with the courage needed to put yourself out there? But far more than stage fright, what happened to her, what happened in her school on February 14, 2018, was sickening. And 38 days later, her body spewed out in revolt; “enough is enough.” And I wondered how many students may have vomited that day as they ran passed the bodies of their murdered classmates? How many collapsed when they reached the safety of their parent’s trembling embrace? 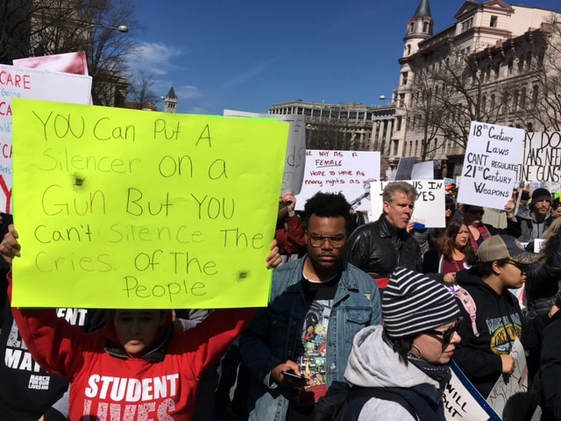 Being sickened by the violence that is happening in this country is a human reaction. Because if knowing that our children and adults are being senselessly murdered in our schools, streets, churches, movie theaters, concerts and nightclubs isn’t enough to make you sick to your stomach, what is?

So, what will I bring home from the March For Our Lives? A renewed sense of conviction to speak up, to show up, to persist. And I will bring back the reminder that we are all human, and our universal experiences give us the power to connect beyond any differences. We can rise up! And we must rise up unafraid and even when we are afraid, because there is hope and we have each other. And with that we can end gun violence!