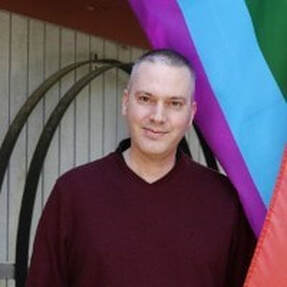 This reflection was read aloud by its author from UUFP’s pulpit on Sunday, March 11, 2018.
It's the end of our fundraising canvass and I've been asked to give our final member testimonial of the season.  The idea apparently is to convey just what the Fellowship means to me in an effort to loosen other people’s purse strings.  As I've talked about here before, Unitarian Universalism, the religion, operates on a very personal level for me, by always calling me to be a better version of myself.  That's been true since I first signed on as member in Florida in my early twenties, and it remains so today.

Unitarian Universalism is my faith — a powerful faith, a transformative faith, a saving faith.  And for the fifteen years I was living overseas, it was a lonely faith — of emails and newsletters, and mostly just me trying to do my best, on my own.

And then 2014 happened:  A crisis year for me and my family.  And in late August of that year I found myself, unexpectedly, relocating to Virginia, and walking into this Fellowship on a Sunday morning, thinking that if I had to live in Virginia, in America, I might as well at least occasionally attend Sunday Services at some UU venue or another.  In the event, I was... unprepared.

I was unprepared on that Sunday morning for the overwhelming relief that washed over me as I sat in the back row, near the double doors, listening to the choir sing Rainbow Connection; and later myself attempting to choke out a rendition of Spirit of Life without sobbing, trying to remember the words.  It wasn't just a sense of coming home after being away for far too long, though it was that.  It was the relief that comes from knowing that I didn't have to do it alone anymore:  That I was again among people who understood my faith — our faith — and were committed to it living it with me.

Since that day, as the crisis in my life has turned into a slow motion nightmare, I have clung to this place with a desperation that comes from knowing I would fall apart otherwise.  More than just calling me to my better self, UUFP has given me the very space to BE a self, to remember I'm a human among humans, and not a mere mechanism that can fall apart.

And to my continued astonishment, I seem even to have grown stronger here, in this grounding environment which we create together.

So that is why I support UUFP.  And I'm deeply grateful that you do as well.