“For all that is our life” by Rev. Andrew

​January is a busy month in Richmond, thanks to the legislative session of the Virginia General Assembly. I spent three days there last month with different organizations: January 9th with Equality Virginia; January 30th with the Virginia Conservation Network; and January 22nd with the Virginia Interfaith Center for Public Policy, a non-partisan coalition of more than seven hundred faith communities working for a more just society, when I was joined by UUFP members Alice and Bob Smith, Lucy and Robin van Tine, Mason Moseley, Sandra Engelhardt and Sarah Davis.

Together, we spent the day: learning about VICPP’s legislative priorities — Driver’s Privilege Cards and In-State Tuition, Wage Theft and Wage Justice, Environmental Justice, and Opposing Weapons in Worship; meeting with our representatives — or, more often, their legislative aides; talking with one another over lunch about regional concerns and efforts; and attending one of a number of afternoon workshops. The day concluded with an address by the Lieutenant Governor and a closing litany, written by Vice Chair of VICPP’s Board, Rev. Dr. Faith Harris, which included the following lines: 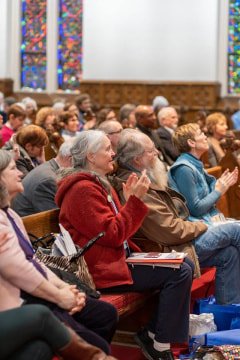 We have spent the day advocating for environmental justice, protections for the immigrant among us as well as for a living wage and dignity for all Virginians.
Our good works are not yet finished, but will continue as we return to our various homes, houses of worship and campuses where we will write letters and make phone calls to our legislators. We will encourage others to be advocates and activists for all people.

As part of bringing the day home to “encourage others to be advocates and activists for all people”, I invited our UUFP participants to write about something that made an impression on them and something that impacts our Fellowship as a faith community. I am pleased to share some of their responses here.

​Sarah begins, “What made the biggest impression on me was the immense time, volunteer hours and energy that went in to organizing the lobbying day! I was further impressed by the great zeal of people from all over Virginia who came to participate! Honestly, political activism is exhausting and takes tireless, persistent, consistent effort by vast numbers of people! It was encouraging to see it all in action.” 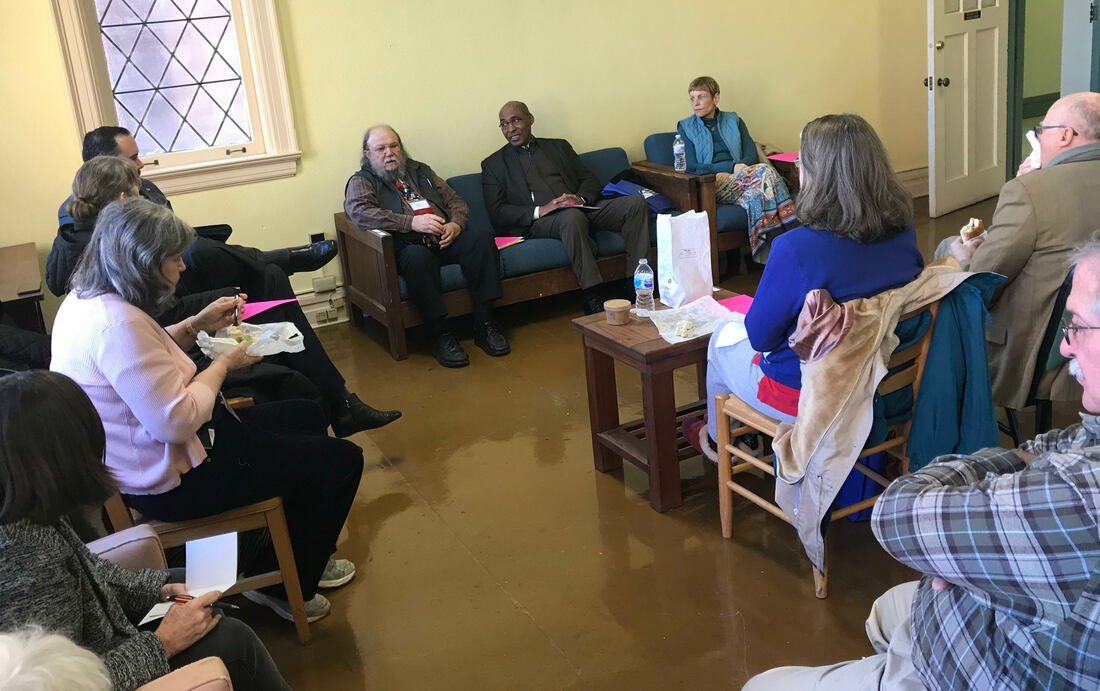 As Mason notes, “With the federal government closed and legislative and executive branches at loggerheads, I was impressed with the activity at the Virginia General Assembly. Cramped hallways full of citizen and professional lobbyists. People turning out from all over the state to be there. Our being made more aware of the issues that mostly we’d read about in local media.”

Sandra comments, “This was my fifth lobby day and the best one yet. I finally got to meet Delegate Yancey of the 94th District. He met with seven of us from the UUFP and had comments on our concerns. My issue was the guns in churches and he agreed that this was not a good idea. We met with Senator Mason and he was very supportive of our issues, saying the governor might have to veto [the bill repealing the statutory prohibition on carrying dangerous weapons to a place of worship]. The VICPP had made the appointments for all who registered and that was wonderful.”

I was impressed by the combination of professionalism and warmth in the legislative aides with whom I met. Whether aligned or in opposition on the various issues, these individuals spend all day talking with constituents while maintaining a consistently respectful and considerate attitude. It cannot be easy talking with so many people, some of whom will be upset or even angry, but the legislative aides are always welcoming and willing to listen.

Concerning our Fellowship as a faith community living its values in the world, I realized anew how someone contacting a legislator on an issue that affects them directly can have a significant impact. In the office of Delegate Pogge’s legislative aide, a chart showing various bills she was tracking included an effort to allow ice-cream trucks to have flashing lights, and the aide explained that this was because an ice-cream truck owner had contacted Pogge about what he saw as an issue of safety. When talking with legislators, our advocacy for issues will be more effective if we can make them as personal as possible.

Sandra continues, “The workshop that I attended was regarding the minimum wage. There are organizations in Richmond and Alexandria that give publicity to those companies that provide a ‘living wage’. There are three levels of support in Richmond ranging from $9.50 an hour with health insurance to $16.00 an hour, and there is an effort underway in Williamsburg to create a similar group. The Peninsula might be included.”

Sarah observes, “One thing that impacts the UUFP as a faith community is that there were scores of UUs at the Day For All People along with Muslims, all stripes of Christians, Jews, Hindus and others. I think we saw so many UUs at the event because Unitarian Universalist Principles require participation in our government in order to fulfill their promise. I’ve come to realize that political activism is fundamental to being a UU. Our congregation is enriched by the fact that many at the UUFP take this fact to heart!”

Mason adds, “The Fellowship is gaining legislative advocacy strength. Several members have been doing this type of activity over several sessions, and several had their introductory experience this year. The task is to keep this up when the General Assembly is not in session. About three thousand bills are dealt with in the forty-five day session. More one-on-one conversations between sessions may be the more influential situation on issues important to us.” 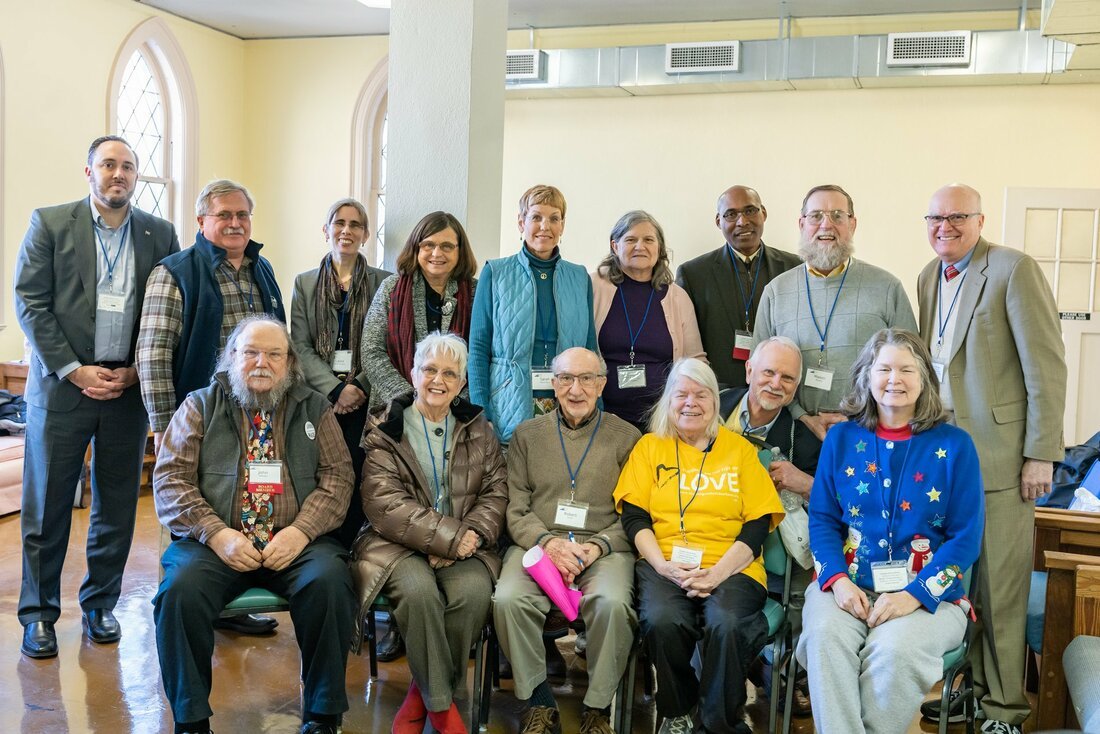 Please consider joining us and the Virginia Interfaith Center for Public Policy in these efforts during the rest of this year and into 2020’s legislative session. Every voice is important and needed in the practice of democracy, and participation is not as difficult or as daunting as it might seem.

As Lucy reflects, “I was a little nervous as we entered the sanctuary of the large, old, slightly crumbling Protestant church in downtown Richmond. It was quickly filling up with people like me, church people of all faiths from all around the state, who had come to lobby that day on behalf of progressive legislation for the state of Virginia. I didn’t really feel prepared. I was inwardly berating myself for not having gone over the white papers on the VICPP website. And furthermore, in my haste to leave the house that morning, I had rushed out without my reading glasses. The organizers at the church had handed me a sheaf of papers outlining the legislation we were going to urge our senators and delegates to support later that morning, but as I took my seat and glanced them over, the words were hardly legible — they were fuzzy on the page.

“Then the first speaker climbed the stairs to the dais and took his place behind the pulpit. He was a middle-aged man with dark hair and he spoke with an accent. As I scribbled some notes, he gave us practical reasons why he and so many others should have a provisional driver’s license. The bottom line was that, like everyone else, he, and others like him, needed to get to work in a safe and legal manner. He did not smile as he spoke. His eyes were sad as he looked out at us. After he gave his short talk, he stopped reading his notes and looked out at us. ‘The most important thing to remember when you talk to your senator and delegate today is to speak from your heart. Thank you.’ Later that morning just a few of us were in the plush, blue-carpeted office of my delegate’s legislative aide. No longer bolstered by the throng of church folk, I thought of the man who had stood before us. My fellow Virginian. My brother. I spoke without hesitation or fear.”