October 15, 2019 by Mason Moseley About Us/Organization

The Unitarian Universalist Fellowship of the Peninsula was well represented at today’s Tidewater Cluster that convened at First UU Church, Richmond, Virginia. ​

Henry Chambers and Sandra Engelhardt served on the Planning Committee. Joanne worked with Youth; Rev. Andrew led a workshop; and Robin facilitated a panel discussion. All told there were 16 workshops in four tracks: Environmental and Social Justice; Spiritual Practices; Congregational Leadership; and, Music. 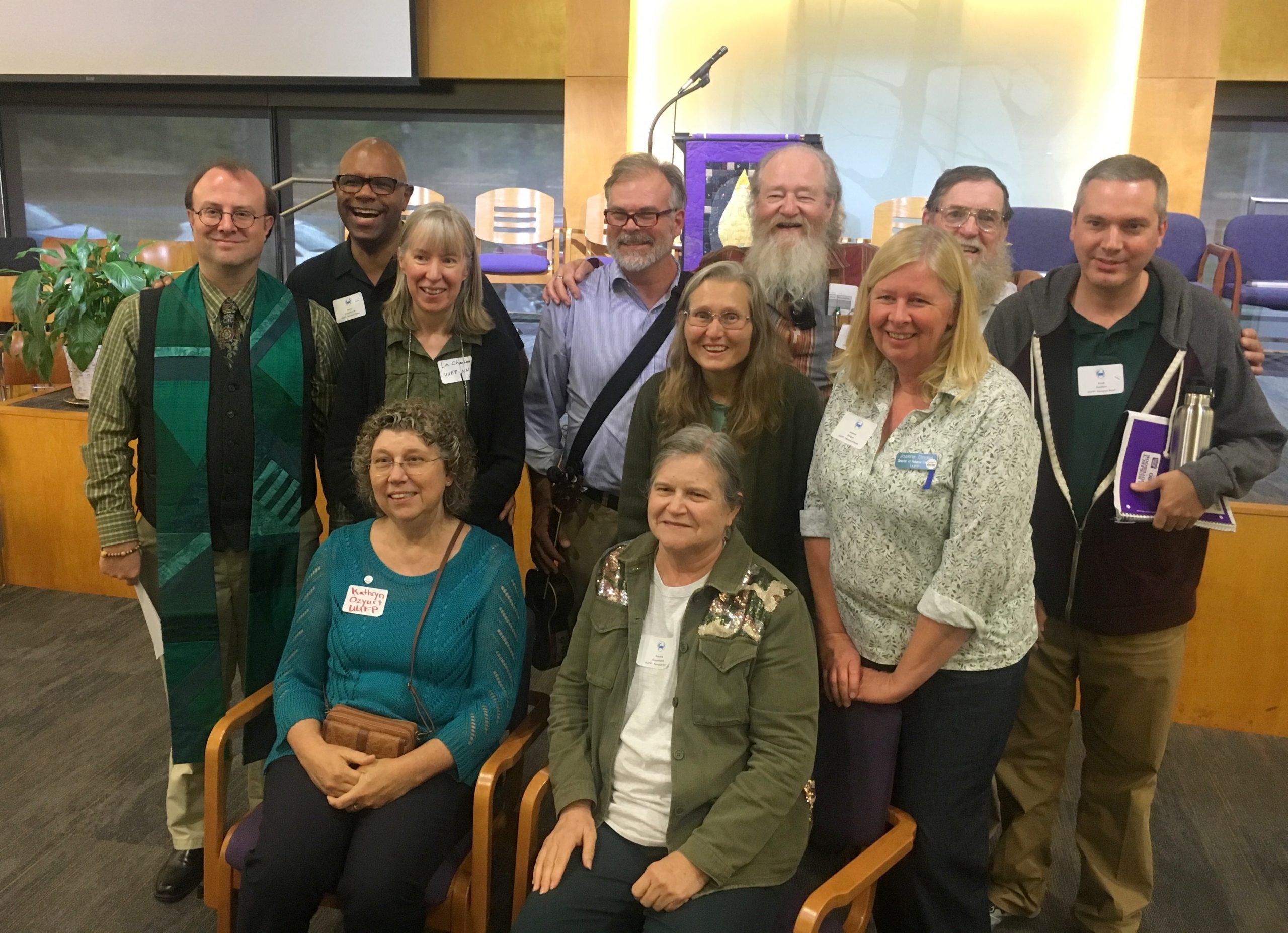 With a theme of “Be The Change,” Rev. Jeanne Pupke’s opening worship reviewed the path of a not-so-anonymous Cluster church’s transition from a flooding basement to a new transformed building and a growing congregation. With that, she said it was time that we proclaim “Let’s Go." She had us rise and look at each other and repeat, “Let’s Go!”

I headed to my first workshop where I met Abbie Arevalo-Herrera who is under the church’s Sanctuary protection with two of her children (see: facebook.com/handsoffabbie). She spoke frankly as to her appreciation for this saving her life, but also about the realization that being so confined has become taxing. The experience brought the current immigration situation in human terms.

Next, we heard from community organizer, Dr. Charlene Sinclair, a graduate of Union Theological Seminary and program coordinator for the Interfaith Organizing Initiative. She has presented at the UU Association’s General Assembly. She spoke of the need to deal with Dangerous Memories of structural violence. To do this will require collective action; reminding us that "if you’re not safe, I’m not safe."

The need is to not be involved in cultural perspectives that create non-persons. Time will need to be looked at not as a linear event, but as circular, encompassing past, present, and future. Our comfortable “head” work needs to become “heart” work. Challenging us to be aware of western, patriarchal thinking, and to change our muscle memory affected by society. Racism, though structural is experienced individually. That there is a "structure of whiteness" that has to be broken.

By now, during a break, I had been approached by a Williamsburg UU suggesting an immigration intuitive. This is why these meetings are so valuable - formal sessions and informal conversations.
The Prison Ministry session was an eye-opener. Todd Landeck, member of the Fredericksburg congregation and former prison inmate told of his work in bringing Secular Humanist groups to the Coffeewood Correctional Center in Mitchells, VA. Having to deal with chaplains, wardens, and the Virginia Corrections Department (VCD). His efforts have led to twice weekly meetings that we would recognize as small ministry circles. Other religious groups were holding meetings. Todd realized there were inmates searching for more open-minded views and discussion. His efforts led to Humanism and Unitarian Universalist being recognized as religions by the VDC, on par with others who were meeting. Rev. McCusker of Fredericksburg has been a support to this effort and visits the Wednesday group once-a-month, usually taking a visitor with him. Todd credited the American Humanist Association and the Freedom from Religion Foundation for the legal work. This was an inspirational session.

“Working Towards Environmental Justice in the Commonwealth: What Can Your Congregation Do?" This panel discussion was facilitated by our own Green Faith Fellow, “Doc ” Robin van Tine. He introduced Gustavo Angeles of the Sierra Club (www.sierraclub.org/virginia) and Kendyl Crawford of Virginia Interfaith Power and Light (https://vaipl.org). They both are a valuable resource for local inequality issues. They depend upon a local issue to come to their attention, and they will come to do training and support to empower those affected by the injustice. Participants were requested to inform them of where such local needs exist. ​

​That led to the Closing Ceremony. The seven Cluster minister processed to the front to a standing ovation. They then closed out the meeting and extinguished the Chalice repeating the "LET’S GO" theme. Attendees then joined in song. Congregations then gathered separately for pictures. I am a big believer in Saturday gatherings of UUs like this Cluster. The spring of 1987, as new UUs, we attended a Thomas Jefferson District meeting in Charlotte, NC. We wanted to learn more about what Unitarian Universalism was all about; how far and wide had those ideas spread. That led to many adventures and friendships and much inspiration. I always want to support the gathering of UUs. The Tidewater Cluster will meet at Coastal Virginia UU, Virginia Beach, next October 2020. This event is going strong. So, LET’S GO! 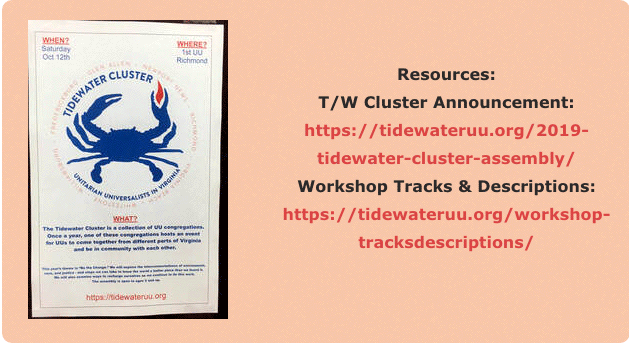